Maharashtra is the birthplace of a rich heritage and great warriors. It has an equally rich culture and it shows. Maharashtrian culture has a magnificent ancestry with hardworking simple people. This reflects in their exuberant traditional jewellery. Their jewellery is an extension of their royalty. Gold jewellery has always been a prominent aspect of Maharashtrian women’s attire. Such traditional jewellery has intricate designs which make them royal. The Maratha and Peshwa warriors have passed on the designs.

Be it a Paithani saree or the Chandrakor bindi, donning some jewellery is a must, to complete the classic look of a Maharashtrian woman. It can get quite difficult for non-Maharashtrians who aren’t familiar with all this to understand the culture.

Known as the Land Of Warriors, Maharashtra is a mix of many cultures and ethnicities. The traditional jewellery of Maharashtra is inspired by the great warriors and kings who used to live in the state.

A Nath (also known as a nose ring in English) is a nose ornament that is adorned by Maharashtrian women at weddings, festive occasions, religious ceremonies, and family functions. It is woven with pearls & studded with pink or white stone in the middle. Nath is a nose ornament that is unique in design than any other nose pin and it completes the traditional look of Maharashtrian women.

Maharashtrian Nath comes in a variety of designs and styles. The famous ones are Banu Nath, Peshwai Nath, Pachu Nath, etc. Nath comes in different styles, Bramhani nath is one of the famous nath studded with Basra pearl & emerald. Nath is a traditional nose ring, studded with pearls, mostly colored white and pink in the middle. Naths are usually made with 22 karat gold and have motis embedded in them.

Thushi is kind of a choker necklace made with varying sizes of gold beads woven together to form a layer of strings. This necklace has an adjustable thread called Dori to accommodate it easily.  It is usually made from 22 karat gold and has jowar seeds design, which indicates that the newly-wed bride will bring prosperity to her new home.

Mohan mala is a long beaded golden necklace having many layers of golden bead strings. The layers may be 2-8, but they may vary. Mohan mala is a sophisticated-looking necklace made out of gold beads. This necklace is mostly simple beads embedded in a single thread. Mohan mala can be layered to make it look kind of fancy.

Lakshmi haar is also known as a coin necklace or temple necklace. The coins are decorated with intricate carvings of Goddess Laxmi & Lord Ganesha.

Putli Haar also commonly known as Laxmi Haar is a necklace that has a few rounds of coins with embellishments of Goddess Laxmi in them. The motifs of Laxmi indicate wealth. These coins are held together with a thread that is braided with silk. This jewellery is highly favored by brides. Did you know? It has been an important part of Maharashtrian Bridal Jewellery since the 17th century!

Kolhapuri saaj is very famous among Maharashtrian women & it is as special as Mangalsutra. It is made with jav mani (golden beads) & 21 leaves shape pendants. Every pendant is well-known for its own meaning. Out of these 21 pendants, 10 pendant defines the ten avatars of Lord Vishnu, 2 pendants have ruby & emerald stone, and 8 pendants are for ashtamangal (ashta means 8 and mangal means good happenings) & the last pendant is taviz.

Making the Kolhapuri saaj requires a lot of skill and patience along with a delicate hand. The sad part is that there are a few Artisans left who can actually craft a traditional Kolhapuri Saaj with precision.

Ambada is a traditional hairpin worn by Maharashtrian brides during the wedding. Ambada also known as Veni Phool is placed on the hair bun of the bride, adorned with pearls and gemstones. The most popular design of Ambada is Sunflower with Jowar seeds. Although with the changing times, Ambadas have more modern and varied designs.

It is a traditional pearl choker-style necklace set crafted from pearls. Tikada set may have one middle pendant or may have several pendants for added attraction. 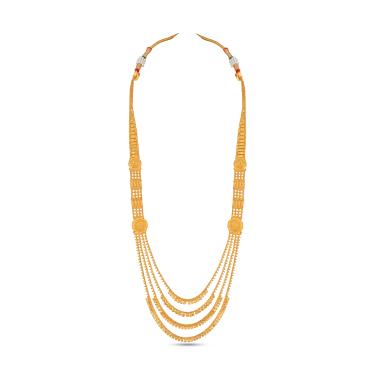 Rani haar is a long pearl necklace set with three layers of pearl string as well as a pendant in middle. It looks very attractive & gorgeous when teamed with paithani.

Vaaki is also known as armlet or bajuband. Traditionally it is worn on both armlets but now a day it is worn only on a single armlet. A traditional design is flat studded with stunning stones in middle. It is crafted with 23-carat gold wire. Made in red color, Vaaki makes for a must-have Maharashtrian jewellery style for every Maharashtrian bride.

Bugadi is a jewellery ornament that is worn on the helix part of the ear.  This beautiful ear ornament is mainly worn by Maharashtrian as well as Northern women. Maharashtrian Bugadi is usually designed with pearls but now in modern times, there are lots of fancy diamond and oxidized bugadi available in beautiful designs.

Jodvi is a toe ring worn by Maharashtrian brides. This toe ring is gifted by the mother-in-law of the bride. This ring symbolizes the bride’s entry into her new home. Jodvi is an important jewellery in every Maharashtrian Wedding.

Known as “Maniwati Beads”, these black and gold beads are lightweight and small in size. The traditional Maniwati beads have little or no patterns on them.

To know more about the variety in popular designs of Maharashtrian jewellery, keep reading our blog and share it with your family & friends. Read more about the Indian heritage and traditional jewelry of different states and tastes, only here.

How to Choose the Best Jewelry Design

How to Choose the Best Jewelry Design CAD Software?

All About Gold Jewellery Designs